My ability to be an admitted and open compulsive gambler in connection to the fact that gambling advertising makes up such a huge percentage of advertising, I see no reason why my being an addict as a gambler, and WFAN’s need to bring in that type of advertising, needs to be mutually exclusive. It doesn’t. I say that because WFAN has afforded me the opportunity to use this amazing platform to speak to the potential dangers of gambling, and to preach about responsible gambling.

I went a long time denying that I had a problem. If you had come up to me three years ago and accused me of playing blackjack too much, I would have said, “You’re out of your mind.” My sickness got so bad that there was a point where I went to my wife, so overwhelmed with my desire to play blackjack and more blackjack, and I said to her, at the height of the popularity of Boomer and Carton, “I’m thinking about retiring and resigning from WFAN, because I want to be a professional gambler. I’m so good at it, I can’t lose. That’s where the money is. That’s how I’m going to behave.” And that’s sick. That’s not proper sober thinking.

So what I did was, shortly after I got arrested in September of 2017, I checked myself into Algamus. I did it, quite frankly, to shut everybody up around me, by saying, “I don’t have a problem, but just to prove it to you, fine, I’m going to check myself into this program out in Arizona.” I thought that I was the only one that ever processed gambling the way I processed it, both emotionally and mentally, and nobody in the world could ever possibly understand how I felt about sitting at a table with six decks of cards and chips in front of me.

So I show up at Algamus, and at my very first group meeting, there’s about a dozen other men and women from all across the country. I go last in this circle of men and women who are 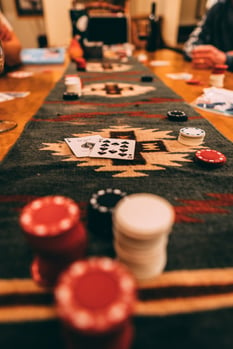 addicts, and I’m going to tell a story that I think is germane just to me. Now, the men and women around me had addictions to Keno, to scratch-offs, to slots, to sports wagering, and the amount of money didn’t matter because money’s relative to what you had access to. I had access to an obscene amount of money, they didn’t, but it didn’t matter. I’m ready to tell my little story and, frankly, I’m ready to go through the motions, it doesn’t mean anything to me. And one by one, every single one of them, talking about how they processed gambling, emotionally and mentally, took every single word verbatim out of my mouth, as if I had written a script and they were reading from it. That was for me an “aha” moment because I denied it prior to that. I didn’t think I had a problem, I just thought that no one else understood that I was so good at it, in my own warped brain. It was at that moment that I had to say to myself, “Hey, moron, you’ve got a problem. Listen to what these people just said. It’s exactly what you said. It’s how I process everything.”

It was at that moment I said, “Hello, my name is Craig, and I’m a compulsive gambler.” Now I’m blessed today. I have not wagered in any way, shape, or form in over two years, and I’m proud of that. I didn’t wager today, and when I wake up tomorrow, I’m hoping that I won’t wage it tomorrow and it’s a daily thing. Now I don’t crave it every minute of every day, but being sober from gambling is a fight for me every day and something that I’m going to be very sensitive to.
That doesn’t mean the station can’t advertise, doesn’t mean Evan ultimately can’t do whatever picks he does. But I want to be very clear about this: I am not making picks. I’m not talking about the point spread. I’m not going to tell you who I like in this game or that game when it comes to gambling, and that’s my decision. The company is aware of that, and they’re going to afford me opportunities beyond just Carton and Roberts to also do some specialized programming regarding responsible gambling and the fact that some people can gamble and it’s never an issue, but some people can’t. And for those that can’t, who may not know it yet, hopefully I can be a beacon and a voice that can help you before it gets too late, because I’ve seen what happens when it gets too late.

Now, for me, gambling was a cocoon. I was abused when I was 11 years old at a sleep-away camp. I didn’t recognize that I used gambling later in life to try to hide from dealing emotionally with that abuse. I had this one really crazy moment when I was at Algamus on the second or third day I was there and it’s called equine therapy. You basically go out to a farm and you talk to horses, and they used the horse to help you open up emotionally. So here I am for 30 years, I’ve never discussed with anyone really the fact that I had been sexually molested as an 11 year old. I hid it and I kept it deep down inside, and I had great shame over it. And the mere fact that I can say it today is a major breakthrough for me and makes me feel really comfortable in who I am in my own skin, which is a very deep story, probably for another day. But I’m out there and they have these four horses. So here I am, I’m now trying to come to terms with the fact of why I’m 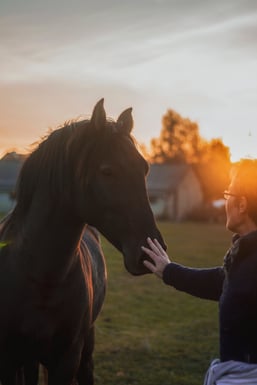 using gambling as a crutch, and I’m going to discuss that with a horse, because it’s very hard to talk to people about it because I hid it for so long. And believe it or not, I’m having a one-on-one conversation with this horse. They essentially wanted me to impose the counselor that did these disgusting things to me, with the horse and talk to the horse like he’s this animal, this person who turned out to be an animal. All of a sudden I had this crazy breakthrough, and tears started streaming down my face and I’m yelling at this horse, “Damn you!” and all this stuff that I’d held in for so many years. It turned out to be this amazing moment in my life where I recognized how closed off I was, how incomplete I was as a person, and how I needed help. And now I get help. I’m in therapy today, and I’m proud to say that I am. I get the help that I need. I’ve leaned on Gamblers Anonymous quite a bit, and other professional therapists to handle and deal with the things in my past that I never dealt with, and I feel really, really good.
I’ve been asked, “Well, why do you deserve a second chance?” And I have an answer for that, “Because WFAN decided I was.” It’s not for me to tell you if I deserve a second chance or not. It’s for me to make sure I don’t mess up the second chance. I can guarantee you there is no third chance.

If you’re feeling emotional about things you’re dealing with, if you think you’re all alone, if you worry that anyone can understand what you’re going through, please take it from me: I’ve been there. Pick up the phone, reach out to somebody, there is always somebody out there willing to listen.